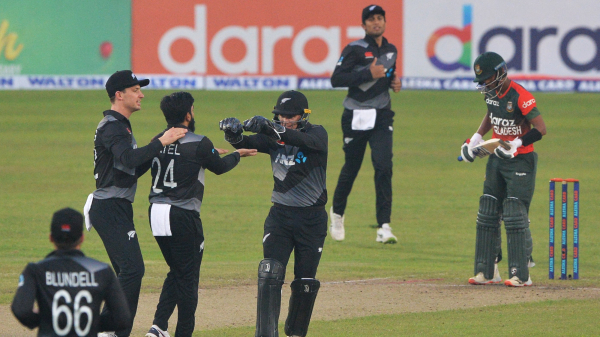 Visiting New Zealand finally beat Bangladesh by 52-run in the 3rd T20I to stay in the series at Mirpur today. Despite the defeat, Bangladesh are leading 2-1 in the five-match series. Bangladesh won the first and second games by seven wickets and 4 runs respectively.
After winning the toss, New Zealand skipper Tom Latham chose to bat first in Mirpur and put 128/5 in 20 overs. In reply, Bangladesh was all out for 76 runs in 19.4 overs.

Visiting spinners kept Bangladesh in check from the beginning. Openers Liton Das (15 off 11) and Mohammad Naim put 23 runs in 2.5 overs before the former went out by Cole McConchie.

Bangladesh’s woe increased when Ajaz Patel removed Mahedi Hasan and Shakib Al Hasan in the same over to reduce Bangladesh to 25/3.

Ajaz Patel once again took two wickets in an over to dent Bangladesh further. Bangladesh lost their fifth and sixth wickets on 43 when skipper Mahmudullah (3) and Affif (0) were dismissed in the second and third balls of the 10th over.

Mushfiqur Rahim and Nurul Hasan Sohan tried to rebuild for the host. But did not last long as Sohan (8) dismissed to McConchie.

It was a 90.6ks slider from McConchie, fizzes in as opposed to turning away to catch Saifuddin in the crease. He plays across it and is struck on the front pad in line with the middle. Saif has asked for a review. No bat is involved and it’s crashing into leg stump. Saifuddin loses his wicket and a review 66/8.

Mushfiqur Rahim 20 off 37 not out was the top scorer for Bangladesh. But his innings was not enough to avoid defeat as Bangladesh all out for 76 in 19.4 overs.

Ajaz Patel was the best bowler for New Zealand picking up 4 for 16 while Cole McConchie took 3 for 15. Rachin Ravindra, Scott Kuggeleijn and Colin de Grandhomme bagged one wicket each.

Will Young and Rachin Ravindra were playing cautiously after losing the wicket of Allen. The duo added 30 runs in the second wickets stand before the former was dismissed for 20 off 20 by Saifuddin. Saifuddin also sends off de Grandhomme in the same over leaving New Zealand 3 down for 46.

Opener Ravindra who was looking good dismissed by Bangladesh skipper Mahmudullh to increase the woe of the host. It was fuller on the stumps from Mahmudullah, Ravindra came forward and look to whip it towards midwicket but missed the ball completely. The ball crashed into the leg stump. New Zealand lost their fourth wicket to 58.

Skipper Tom Latham who was unbeaten on 67 last match today dismissed for 5 by Mahedi Hasan. Mahedi dragged his length back, the batter closes his bat-face fairly early once again and chips it back to the left of the bowler.

But Henry Nicholls and Tom Blundell help New Zealand to recover from 62 for 5. The pair made 66 to help the visitors to put strong 128 runs for five wickets. Nicholls made unbeaten 29-ball 36 while Blundell was not out scoring 30 off 30.

Mohammad Saifuddin was the best bowler for Bangladesh who took 2 for 28 while Mustafizur Rahman, Mahmudullh, and Mahedi bagged one wicket apiece.