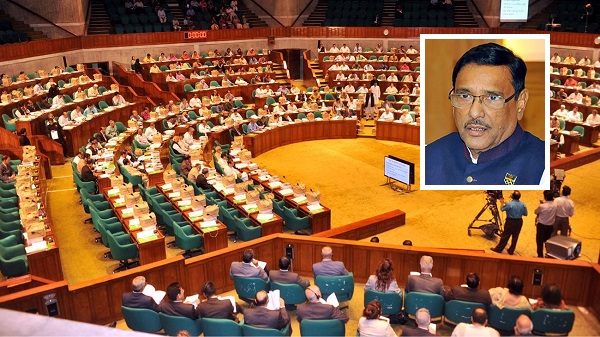 The Highways Bill, 2021 was placed in parliament today, aimed at having a full-fledged law replacing a century-old and inadequate one.
On Saturday, Road Transport and Bridges Minister Obaidul Quader raised the ‘Highways Bill-2021’ in Parliament session, presided over by speaker Dr. Shirin Sharmin Chowdhury.

The bill was later sent to the parliamentary standing committee on Road, Transport, and Bridges Ministry for further scrutiny. The committee was asked to submit its report before the House within four weeks.

The new law is being enacted for construction, development, and maintenance, free, orderly, and safe movement of vehicles.

According to the bill, it is expedient and necessary to enact new laws to build a modern, improved, efficient highway transport system with infrastructural development, safe and dynamic vehicular traffic, timely construction, development, operation, management, and maintenance of highways to ensure highway safety.

Section 9 of the proposed law said the installation of any infrastructure on highways without the approval of the Roads and Highways Department will be ‘infiltration’. Section 14 of the bill provides for a maximum imprisonment of two years or a fine of Tk 50,000-Tk 5 lakh or both for this offense.

The bill also states that public or private utility service providers will not be allowed to dig roads without permission. If anyone defies the rules, will be brought under punishment. According to the ‘Mobile Court Act-2009’, the mobile court will provide the punishment mentioned in this law.

The bill also proposed for a special place on the highway for the movement of the disabled, children, and the elderly.