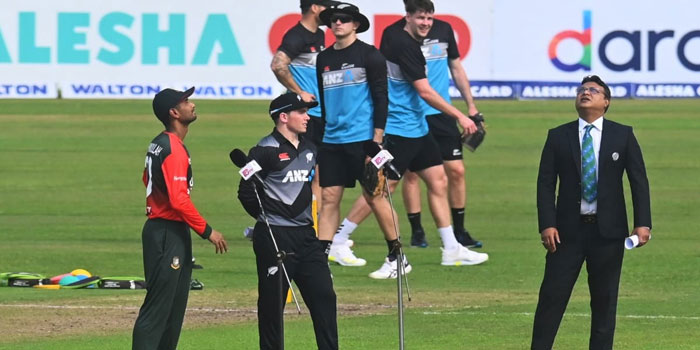 Bangladesh has won the toss and decided to bat first at the 2nd T20 of the five-match T20 series held at Mirpur Sher-e-Bangla National Cricket Stadium.
The match will be aired at 4 pm and will be broadcasted live by the T-Sports, Gazi TV.

Bangladesh won the first T20 in emphatic fashion, bowling out New Zealand for their joint-lowest 60 in their history of the shortest format of cricket. They though faced a hiccup in batting, eventually cruised to a seven-wicket victory.

It was Bangladesh’s first victory against the Kiwis in the 11th attempt but it was expected given their track record at home.

The first match went as per the plan and as per the template which they followed to crush Australia by 4-1 in the five-match series last month. The template was simple—the spinners will slice the top order and then Mustafizur will finish the things.